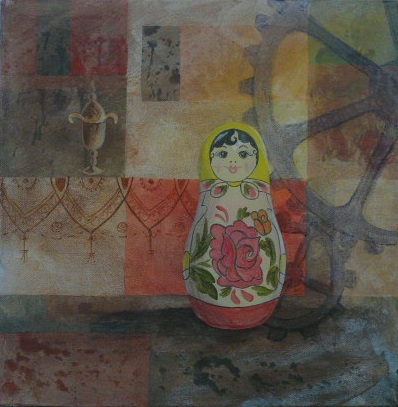 This painting has many layers of Russian-related symbolism in it. The background was originally painted in 2009 from a satellite image of fields near Povorino. I overworked some washes and liked the somewhat "vintage" look, and originally intended to work it up as a more conventional English still life. Somehow the cogs seemed to fit, referring to the giant industrial processes of the former USSR. The samovar was placed in lieu of an English teapot. The doll completed the picture- "Baboushka" means old woman, or grandmother, which I have recently become for the second time. Placing it in front of the cogs is a comment on how tightly controlled regional folk art was under the Communist regime, ironically probably preserving it better than our own half-forgotten traditions. While the lacework design is typical of Russian work, it was actually adapted from a German porcelain design manual.

Oops, you forgot something.

The words you entered did not match the given text. Please try again.

Reply DLkGreem
4:33 PM on February 10, 2019
Missing dll from your laptop? Error on loading a game? Site foundddl.com can fix it! Download your missing dll from http://founddll.com/printui-dll/ page. Fix the error now!

Reply Acletic
4:49 AM on September 12, 2020
The McLaren 675LT Is an Ultra-Rare McLaren Supercar https://us.vlipa.lv/video/UDg1TTBqV3oyZGtlWjU0PUY2.html

Reply d-f-c.comMeesT
11:47 PM on January 14, 2021
Paper forms are simply less of a valid option now.
Quite apart from our awareness of the environmental impact,
Covid 19 has made it clearer still that ‘Digital’ is the way to go.
We have the product to help you do away with your paper forms.
Working remotely, Contractors and Employees can to use their personal computers or smart phones by simply filling in the required digital forms and summit.
On receipt, the office can save the information to the record system easily, its simple, secure and cost effective.
Digital Form Creator is a low-cost way to provide real time data via the internet to still meet operational expectations easily Starting at £12.50 a month.
We are offering a 1st month free coupon to see if it can be incorporated into your current operations,
to get one of the 1,000 coupons go to http://www.d-f-c.com.au/c19 for more information.

Reply TerryCalge
2:39 AM on March 15, 2021
The last over and over again I slogan Gail Dines stand up for, at a convention in Boston, she moved the audience to tears with her statement of the problems caused nearby obscenity, and provoked sniggering with her virulent observations upon pornographers themselves. Activists in the audience were newly inspired, and men at the end – sundry of whom had not viewed porn as a disturbed in the vanguard – queued up afterwards to pawn their support. The mise en scene highlighted Dines's unsound charisma and the factually that, since the expiry of Andrea Dworkin, she has risen to that most scabrous and interesting of conspicuous roles: the community's paramount anti-pornography campaigner.

Reply AlfonsoHiz
8:33 AM on March 15, 2021
The pattern time I saw Gail Dines converse, at a talk in Boston, she moved the audience to tears with her description of the problems caused by means of porn, and provoked laughter with her intelligent observations near pornographers themselves. Activists in the audience were newly inspired, and men at the end – sundry of whom had on no account viewed pornography as a problem in advance of – queued up afterwards to pledge their support. The scene highlighted Dines's explosive charisma and the deed data that, since the death of Andrea Dworkin, she has risen to that most sensitive and interesting of free roles: the community's foremost anti-pornography campaigner.

Reply SuzetteGut
7:28 PM on May 19, 2021
Thanks for the valuable information. I have used it.
cindy landolt nude